The Spitalfields Trust has joined the reformed Liverpool Street Station Campaign ‘LISSCA’ originally set up in 1974 and chaired by John Betjemen to fight the proposals to demolish the station.

A new set of proposals are now being consulted on that represent a backward step for building conservation in this country. The scheme is for the removal of all the conservation-led restoration from the twentieth century in order to construct an overwhelming cantilevered tower that envelops the station and its adjoining hotel. Such an enormous development surely does not reflect the current needs of the City at a time when level of office use have not recovered since Covid. The proposals are still at high level and detailed plans have not yet been released. 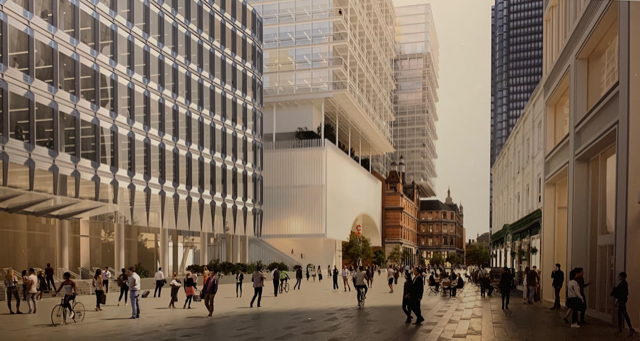 CGI of the proposals viewed along Liverpool Street looking east 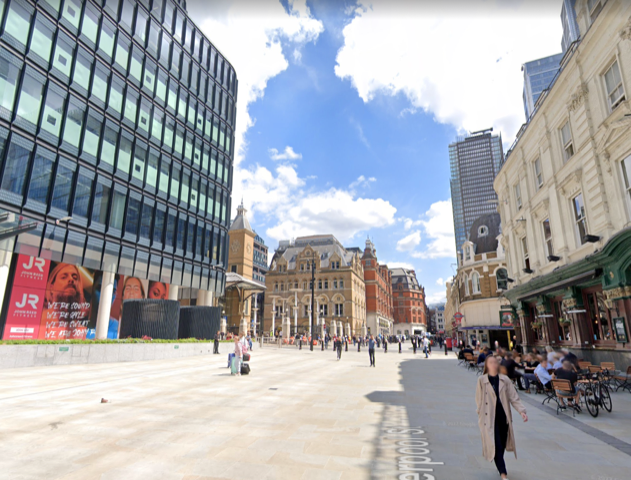 The LISSCA committee is comprised of Save Britain’s Heritage, The Twentieth Century Society, Historic Buildings & Places, The Georgian Group, The Spitalfields Trust, Civic Voice, London Historians and The Victorian Society. The close gathering of these major voices for heritage and conservation is extremely rare and reflects how seriously they individually, and collectively, view the threat to these important buildings.

As well as being one of the founders of the Spitalfields Historic Buildings Trust in the Mid-1970’s, Peter McKay was my associate in the hospitality business from shortly after that time until the relatively recent onset of the illness from which he died last month. His death was peaceful, at home in the Isle of Wight, with family members there to comfort him.

We met at the Trust’s original impromptu HQ in the waiting room of Patrick Trevor-Roper, a celebrated eye surgeon, whose huge Regency house in Regent’s Park was always buzzing with architectural conservation enthusiasts.

Peter’s background was unconventional, to say the least. He was the son of a WW2 Canadian Air Force pilot and, by his own account, a slightly scatty Englishwoman. The family went back to Canada for a time after the war, but the marriage failed and Peter, his brother and their mother came back to live in Highgate, North London. Peter’s father paid for him to attend Highgate School, but when he was 14 payments stopped and he had to leave with no qualifications, taking casual jobs first at a local fishmonger’s and then at a garage, where he became rather good at fixing and then selling second-hand cars. That was how he met Michael Shohan, who had made a fortune manufacturing featherbeds for smart department stores and whose expensive car Peter maintained.

Shohan was to be key to Peter’s start in the travel business, but in the meantime he had replied to an advertisement for ‘a small energetic young engineer’ to drive four Cambridge undergraduates across Asia to India in a cramped, overloaded Land-Rover. Having carried this out, Peter could see that it was the beginning of a wave of such expeditionary enterprises, and it was Shohan who funded him to purchase a second hand Land-Rover and make a start. This was soon replaced by ex-WD Bedford trucks with 4WD, packed with students eager to see the world. The company running the expeditions was called Intertrek and based in Battersea. It thrived until the Cold War intensified and the Shah’s collapse in Persia made its routes unviable.

Peter had meanwhile married one of his Intertrek clients, Elizabeth, who was the daughter of the newspaper baron Sir Edward Hulton. Elizabeth was an old friend of Lindy Guinness, Marchioness of Dufferin and Ava, and on a visit to Lindy’s house in Ireland she and Peter met Dan Cruickshank and Colin Amery, both then feature writers at the Architectural Press, who were orchestrating public outrage at the widespread demolition of historic buildings. Back home, a follow-up gathering included the late Mark Girouard, the distinguished architectural historian, who had been a boyfriend of Elizabeth’s. The conversation turned again to the unnecessary destruction of swathes of historic London that was then underway and how no one was doing anything except talk and write about it. Peter’s knowledge of architectural heritage was minimal, but he leapt at the idea of an organisation which would not just lament their destruction but set about acquiring the buildings themselves, fixing them up and selling them on. Mark’s suggestion of Spitalfields as the ideal place to start led quickly to the Trust’s formation, with Mark as Chairman, Lindy as Patron and me as Secretary, under new legislation that made it legal, as our lawyer Michael Carey explained, to buy, repair and sell buildings charitably without paying Capital Gains Tax on any increase in value.

Peter’s practicality, amounting almost to genius, came into its own when a team of Irish navvies arrived to begin demolition of St Botolph’s Hall in Spital Square. The 19th Century school attached to the hall had been an early casualty, flattened just before our foundation, but we were convinced the hall, a fine free-standing Victorian building in itself, should survive as a key component of the flourishing community we always had as our target for thedistrict. Part of the roof was missing but the building itself was sound, so we broke in and set up camp in one of the drier corners. It was snowing hard but, armed with mattresses and bedding, we locked ourselves in behind the hall’s stout iron gates to keep intruders out.

The question of food was clearly a consideration. Peter’s solution was to reverse his Volvo estate car hard up against the telephone box outside with the door open, using the box itself as an office telephone (this was long before mobiles) and posting bacon butties and tea through the bars to us inside. His huge woolfhound, Tara, though passive in the extreme, served as an additional deterrent. This we kept up for several days while our leader, Mark, himself one of the campers, used his contacts in the architectural world to persuade the owners of the site to agree that it should stand. The building is now, of course, The Galvin La Chapelle restaurant, beautifully restored and one of London’s grander eating places.

Thanks to the Trust’s pioneering work, Spitalfields slowly came into its own as an attractive place to live instead of a slum, especially if you were a banker or fund manager with an office in the City of London business district next door. Instead of having to buy up basket case buildings, many of them in use as sweat shops for the garment industry, we were able to rely on end users taking them on and repairing them with our advice while we undertook similar projects outside London. This meant that Peter, fully occupied by now in the rapidly growing hotel business, became less involved from day-to-day but continued to attend our frequent meetings and provide appropriate financial advice. Today, the Spitalfields Trust is one of few if any other survivors of those founded under Michael Heseltine’s pioneering legislation, and by far the most successful of them. Peter died with that satisfaction, as well as the assurance that his hotels were still in family hands, so at least two of the passions that were so characteristic of him will carry on.